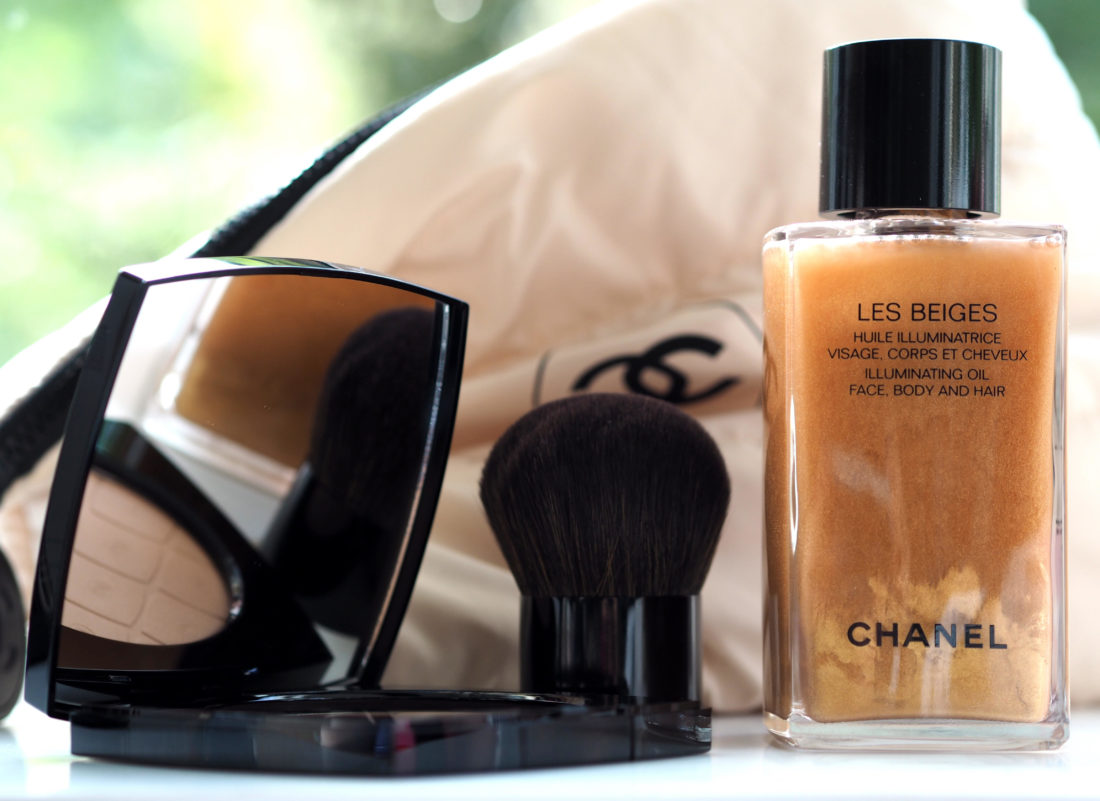 [unpaid/sample] This year, CHANEL has gone large for their Les Beiges collection which somehow feels appropriate for this coming summer with no restrictions (fingers crossed).

There’s also a giant size Kabuki Brush to swish it over your skin with.

For context, I’ve popped the XXL version next to a ‘normal’ size Chanel highlighter. I mean, I would say it’s not portable but I’m eyeing up beach-type bags for summer and neither brush nor compact are particularly heavy so if your bag is roomy and you think you’ll need a top up, it’s not as insurmountable as it sounds. Although, a good trick is to load up your brush, pop it in a sealable bag and just carry that instead. It’s not glamorous, I know.

The shade I have here is Sunshine (light) and it’s the right shade for me despite having olive tones. In honesty, I’m more of a fan of the Les Beiges Healthy Glow Bronzing Cream of which there is a new shade – Medium. Previously there was only the original shade and a deep shade, so this sits right in the middle of those tones. I don’t use bronzer often but cream is one that I do turn to because I feel like I know what I’m doing with it although I use it more as a blush than anything.

If you do like a powder bronzer, needless to say, this is as light and airy as they come with a little kick of pearl for more glow. It’s Ł66 and the Kabuki is Ł42.

The other key product for Les Beiges 2022 is the Illuminating Face, Hair & Body Oil.

I would love to slosh this lava-like body oil all over myself but am somewhat held back by the gold and bronze shimmer – absolutely lovely for post beach arms and legs but slightly inappropriate for a grey day in the south-east. I think the joy of this is the possibility. When you take the bottle from the package, you need to shake up the shimmer which is as satisfying as shaking a snow-globe – do it in the sunlight and it’s hard to look away from the swirling sparkles. It’s a dry oil so you won’t look slicked but it leaves a veil of softness which is delicious. There is a scent but other than ‘floral sun tan lotion’ I can’t really pin point what it is. To use it on your face you’d probably want to apply just with your finger tips onto the cheek bones and also use the same pared back approach for hair. Pour a little in the palm of your hand, put your hands together and lightly sweep through the mid lengths to ends. I haven’t done this yet but the effect should be to just add some glimmer that’s only apparent when the sun comes out. It’s Ł70 HERE.

It’s hard to show bronzer to full effect but this is the shade of Sunshine. In June, CHANEL is launching their Water-Fresh Blush – six shades in the same micro droplet formula as the Water-Fresh Tint of which I am a big fan for its weightlessness and ability to give a skin perfecting look using virtually nothing. I bought one when then launched in Asia last year so I’ve already given it the once over – I will have more to show you nearer the time. There will also be the Water-Fresh Complexion Touch de Teint – a light, micro-fluid concealer which I had applied when I went to the press showing. It’s surprisingly effective for something that feels like nothing but it’s not heavy weight enough to cover spots or deeper shadows.